As we've come to the close of 2019, corporate America is continuing to make positive strides in female diversity. Last year marked a new landmark, every S&P 500 board has a least one female member.

Studies have shown companies with female board seats achieve better financial performance vs their non diversified counterparts. This could be, in part, the reason institutional investors like BlackRock (Tii:BLK) are placing pressure on publicly traded companies for female recruitment. State legislation can also be playing a role in women stepping into corporate leadership roles. In 2018, California became the first state to mandate at least one female sit on the board of all publicly traded companies incorporated in the state.

According to Spencer Stuart, total 2019 female board representation of S&P 500 companies is 46% which is up from 40%, 30%, and 17% in 2018, 2014, and 2009 respectively. Likewise, although progress has been slower, minority representation has been trending in a positive direction for the same time period.

Let's take a look at some additional stats: 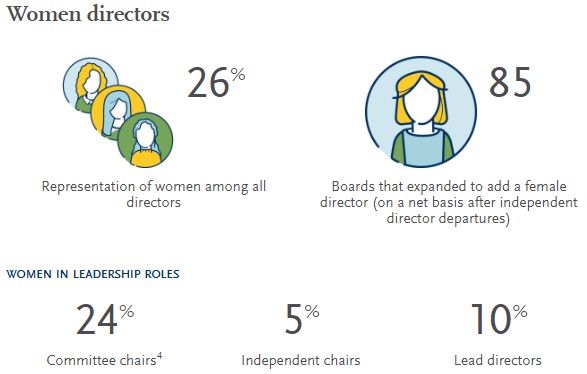 Although progress has been historically slow for female representation across all areas of corporate participation, the strides made from the last year are very encouraging.