Sweet 16 CEOs: Which Company Will Claim the TiiCKER Tourney Title?

Want to win some cool prizes? In the spirit of March Madness, TiiCKER is happy to present its first annual Sweet 16 CEOs Competition and Sweepstakes. This game will pit CEOs, representing both the universities they attended and publicly traded companies they lead. While some of the universities in our tourney may have already been eliminated from the actual NCAA contention, they play on here for a shot at the championship.

Sweet 16 CEOs Competition winners will be chosen based on a variety of factors tied to company performance. The best part is you can win too! In the spirit of March Madness, tell us which team you are cheering for and why you are cheering for them. You will be entered for a chance to win one of four Benzinga.com Essential memberships for 12 months. That’s a $1400 value EACH. Click here to participate.

The first round will feature the following matchups: 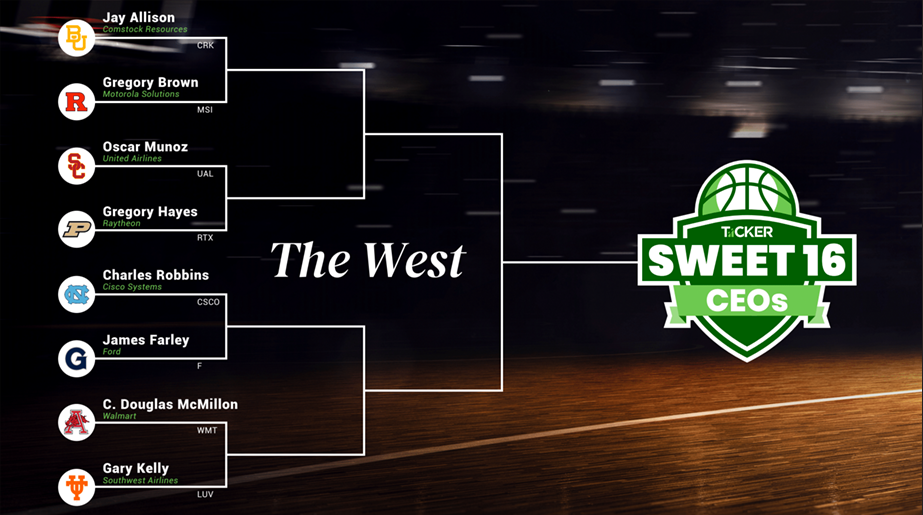 Cisco Systems (Tii:CSCO) vs. Ford (Tii:F): In this Mid-Atlantic matchup, the North Carolina Tarheels, represented by Charles Robbins, Chairman and CEO of Cisco Systems Inc., will face-off against James Farley, President & CEO of Ford Motor Co., and a graduate of Georgetown University.

Walmart (Tii:WMT) vs. Southwest Airlines (Tii:LUV): In this battle of neighboring states, C. Douglas McMillon, President and CEO, Walmart, will represent his alma mater, University of Arkansas and the Razorbacks, against Gary Kelly, Chairman and CEO of Southwest Airlines and his Texas Longhorns. 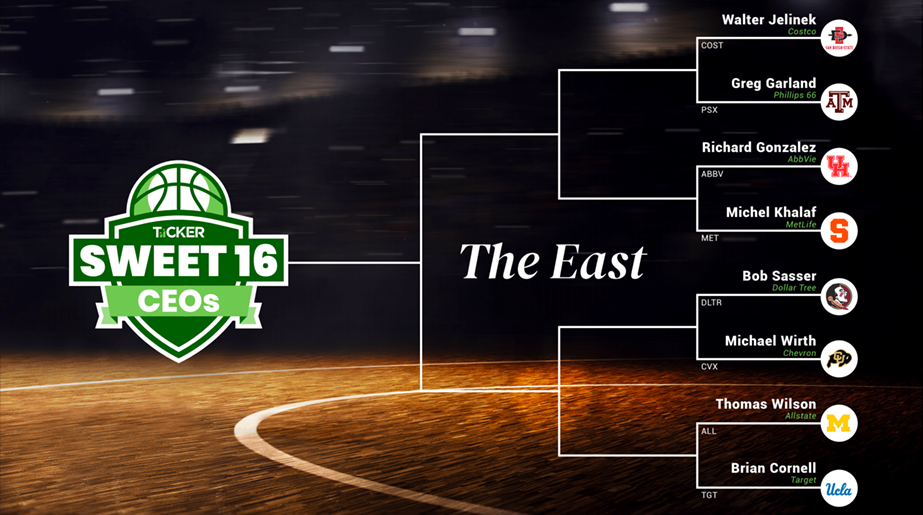 Dollar Tree (Tii:DLTR) vs. Chevron (Tii:CVX): Florida State’s Bob Sasser, former CEO and current Executive Chairman of Dollar Tree Inc. will represent the Seminoles against Michael Wirth, Chairman and CEO of Chevron Corp., a native of the Centennial State and graduate of the University of Colorado.

Allstate (Tii:ALL) vs. Target Corp. (Tii:TGT): Leading insurer or retail giant? In this contest, Thomas Wilson, Chair, President and CEO of Allstate Corp. will represent the University of Michigan Wolverines against UCLA and Brian Cornell, Board Chairman and CEO of Target Corp.

How will these matchups play out and who will compete in the second round? Check back and follow us on Facebook for updates. And don’t forget to tell us which team you are cheering for to be entered for a chance to win one of four Benzinga.com Essential memberships for 12 months. That’s a $1,400 value EACH. See official terms.