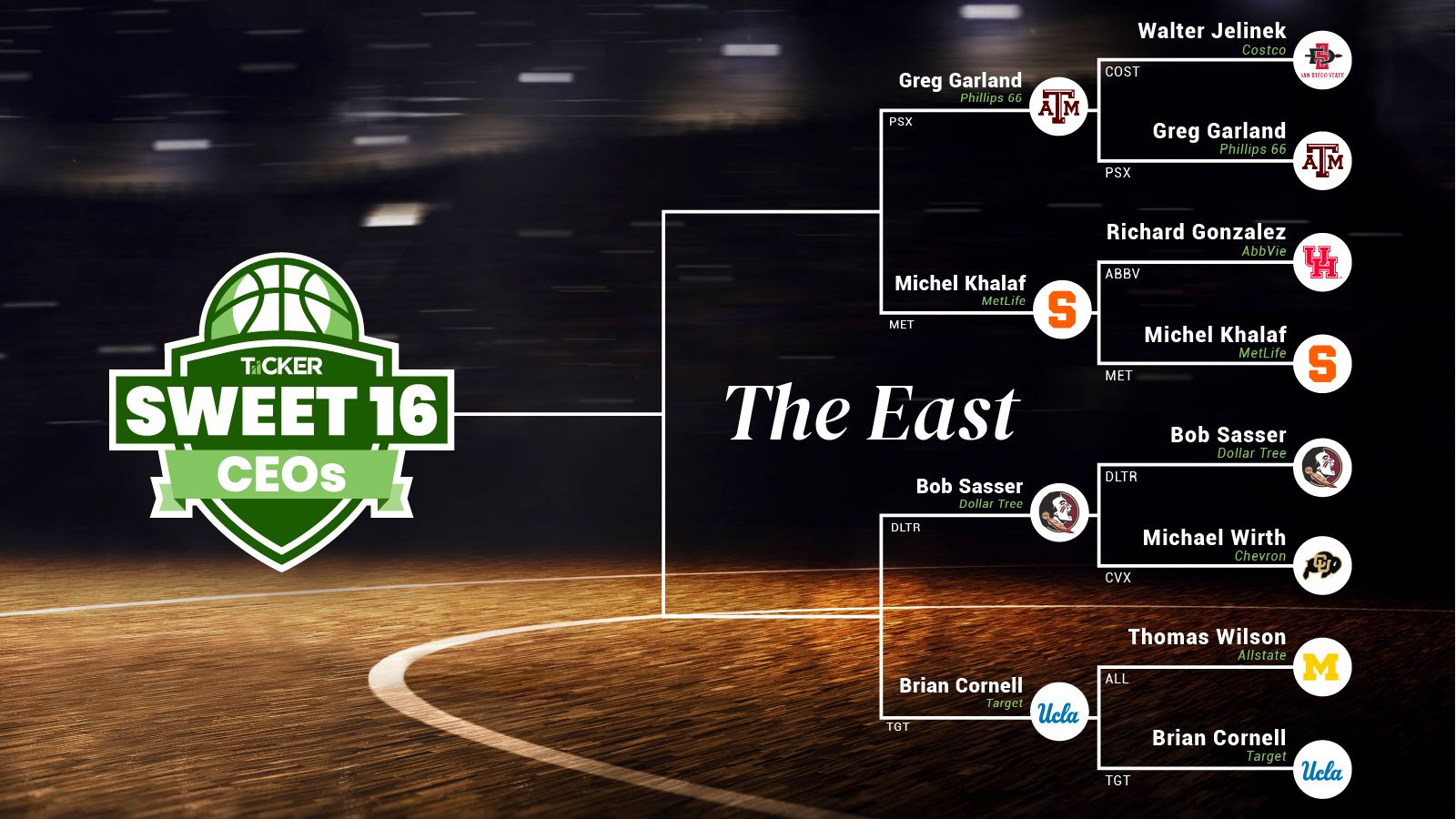 TiiCKER’s Sweet 16 CEOs Competition and Sweepstakes, which pits execs – representing both their alma maters and the publicly traded companies they lead – against each other while offering chances to win valuable prizes is well underway. The first round in our Eastern Division bracket saw an upset or two as well as the departure of a few well-known consumer brands.

The TiiCKER team looked at one-year returns for each company’s common stock to determine who moves ahead and who goes home in the first round of Eastern Division competition. With these contests complete, let’s look at who came out ahead and who they will face in the next round.

In the first round, Greg Garland, representing his alma mater, Texas A&M and Phillips 66 (Tii:PSX), where he serves as Chairman and CEO, dominated W. Craig Jelinek, President, CEO and Director of Costco Wholesale Corp. (Tii:COST), and graduate of San Diego State University. Phillips 66’s 80.3% one-year return easily topped Costco’s 16.9%. In a separate matchup, Michel Khalaf, President and CEO of MetLife Inc. (Tii:MET) and Syracuse University graduate, notched a lopsided victory, routing Chairman and CEO of AbbVie (Tii:ABBV), Richard Gonzalez, who attended the University of Houston, by a score of 127.9% to 45.7%.

In other first-round action, Florida State alum Bob Sasser, former CEO and current Executive Chairman of Dollar Tree Inc. (Tii:DLTR), narrowly edged out University of Colorado graduate Michael Wirth, Chairman and CEO of Chevron (Tii:CVX), with a one-year total return of 62.1% to 60.1%. Meanwhile, UCLA’s Brian Cornell, Board Chairman and CEO of Target Corp. (Tii:TGT) and its one-year total return of 83.3% topped the 36.2% generated by Allstate (Tii:ALL). This performance eliminated the insurer as well as its CEO, Michigan Wolverines alum Thomas Wilson.

With those matches in the books, let’s take a look at what’s next for the victors for Round 2.

Phillips 66: A diversified energy manufacturing and logistics company, Phillips 66 faced a host of challenges last year as the pandemic suppressed demand for fuels. As a result, the company took steps to reduce costs and capital spending, secure additional liquidity and suspend share repurchases during last year’s uncertainty. For its fourth quarter, Phillips 66 reported a loss of $539 million or $1.23 per share; adjusted loss of $507 million or $1.16 per share. However, the company also completed major growth projects and announced plans to convert its San Francisco Refinery into a renewable fuels facility to meet the growing demand for renewable energy.

MetLife: One of the world’s leading financial services companies, MetLife provides insurance, annuities, employee benefits and asset management services in more than 40 markets globally. While the company’s fourth-quarter 2020 net income of $124 million, or $0.14 per share, is substantially lower than the $536 million, or $0.58 per share, reported in the same period in 2019, its resilience to low interest rates and expense discipline resulted in a stronger-than-expected quarter. Looking ahead, MetLife plans to benefit from its Next Horizon strategy, which shifts its model toward less market-sensitive businesses with strong free cash flow.

Dollar Tree: A Fortune 200 company and a leading operator of more than 15,000 stores across 48 contiguous states and five Canadian provinces, Dollar Tree leveraged its strong balance sheet to repurchase 3,982,478 shares for $400 million in fiscal 2020. Its board also expanded its share repurchase authorization by a further $2 billion. The discount store operator also rolled out a new Combination Store format that performed well in nearly 50 small towns and rural communities during fiscal 2020. The Combination Store builds on Dollar Tree’s 2015 acquisition of Family Dollar Stores, Inc. and its strong presence in small, sparsely-populated towns where Dollar Tree would not normally open a location.

Target: While 2020 was full of uncertainties in the retail segment, sales remained strong at Target’s nearly 1,900 stores – driven by a robust e-commerce platform. Same-day services such as Target’s curbside pickup option grew 212% in the company’s fourth quarter. The retailer also introduced Favorite Day, a food and beverage brand featuring more than 700 items across bakery, snacks, candy, premium ice cream, cake decorating supplies, beverage mixers, mocktails and more. Consumers wanting a COVID-19 vaccination may receive one at a Target location as a result of a partnership with 600-plus CVS locations within Target stores to administer the vaccines.

Check back to see who moves on and who goes home in these Eastern matchups. The best part is you can get in on the action too! In the spirit of March Madness, tell us which team you are cheering for and why you are rooting for them to be entered for a chance to win one of four Benzinga.com Essential memberships for 12 months. That’s a $1400 value EACH. Click here to participate. See official terms.