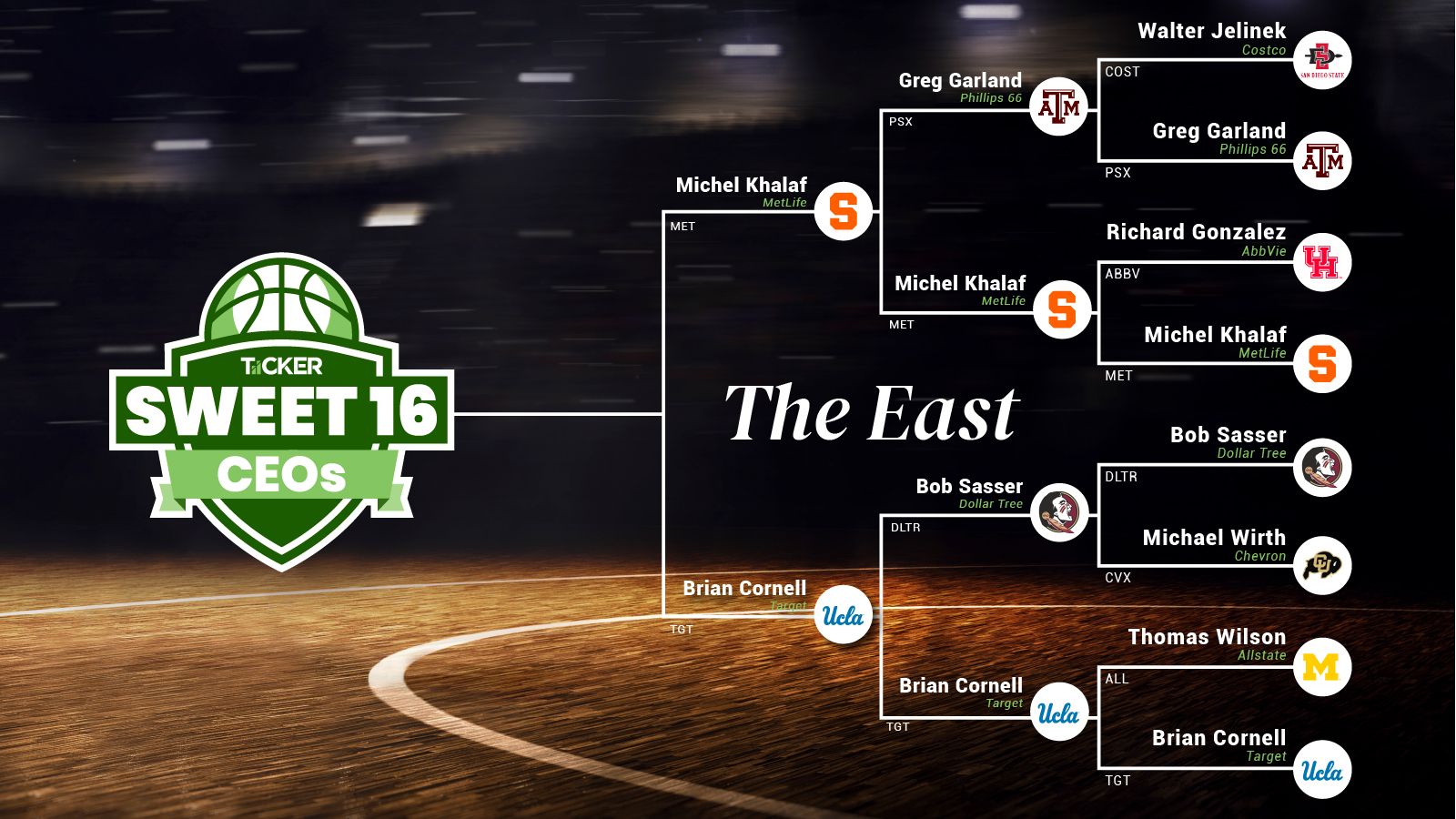 TiiCKER’s Sweet 16 CEOs Competition and Sweepstakes, which pits execs – representing both their alma maters and the publicly traded companies they lead – against each other while offering chances to win valuable prizes, is down to the final four. The TiiCKER team looked at two-year common stock returns for each company remaining in the competition in the last round. With these contests complete, let’s look at who came out ahead and who they will face in the next round.

MetLife (Tii:MET), headed by Syracuse University alum Michel Khalaf handily topped Phillips 66 (Tii:PSX) and its CEO, Greg Garland, who represented his alma mater, Texas A&M. In a lopsided match, Metlife’s 19.3% two-year return easily beat out Phillips 66’s negative return of -16.7%. In the first half of our Final Four Round, MetLife will face Target Corp. (Tii:TGT) and UCLA graduate Brian Cornell, the retailer’s Board Chairman and CEO. Target also easily ousted its adversary, knocking out Dollar Tree (Tii:DLTR), and its Executive Chairman, Florida State alum Bob Sasser by a score of 134.8% to 8.8%

Let’s take a quick look at the companies our two remaining Eastern Division executives lead, starting with the insurance giant. While MetLife’s fourth-quarter 2020 net income of $124 million, or $0.14 per share, was substantially lower than the $536 million, or $0.58 per share, reported in the same period in 2019, its resilience to low interest rates and expense discipline resulted in a stronger-than-expected quarter. Its stock price, which has a 52-week range of 31.78-120, is relatively flat for the year, down some 4% in 2021 to trade around the $85 mark.

Target is coming off of a stellar year. The retailer’s 2020 sales growth of more than $15 billion was greater than its total sales growth over the prior 11 years. Digital sales grew by nearly $10 billion in 2020, driven by 235% growth in same-day services. The company also gained approximately $9 billion in market share. Target’s common stock, which has a 52-week range of 90.17-201.96, is up roughly 12% for the calendar year, trading around the $200 mark.

Check back to see who moves on and who goes home in these Eastern matchups. The best part is you can get in on the action too! In the spirit of March Madness, let us know which team you are cheering for and why you are rooting for them to be entered for a chance to win one of four Benzinga.com Essential memberships for 12 months. That’s a $1400 value EACH. Click here to participate. See official terms.