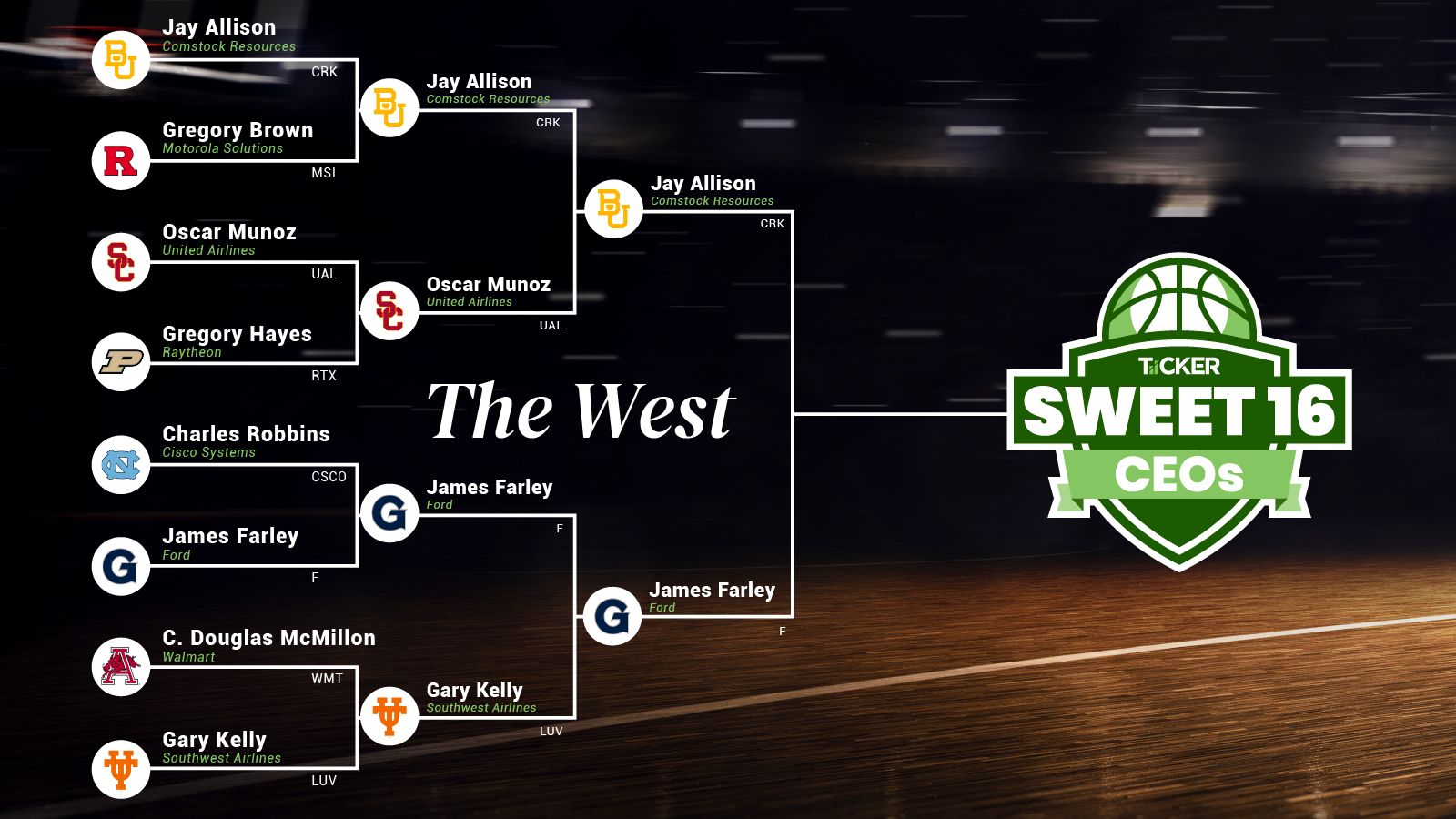 TiiCKER’s Sweet 16 CEOs Competition and Sweepstakes, which pits execs – representing both their alma maters and the publicly traded companies they lead – against each other while offering chances to win valuable prizes, is down to the final four. The TiiCKER team looked at two-year common stock returns for each company remaining in the competition’s last round. With these contests complete, let’s look at who came out ahead and who they will face in the next round.

In the last round, despite a negative two-year return of -11.0% Comstock Resources (Tii:CRK), represented by Baylor University alum M. Jay Allison, the natural gas producer’s Chairman and CEO, performed well enough to topple United Airlines (Tii:UAL) and its -31.1% two-year return. This eliminates the air carrier as well as its CEO, USC alum Oscar Munoz. In our other Western Division match, Ford Motor Co. (Tii:F), headed by Georgetown graduate James Farley, easily routed Texas A&M and one of its notable alumni, Greg Garland, Chairman and CEO of Phillips 66 (Tii:PSX), with a two-year return of 59.0% to the energy company’s -16.7%.

With the Western Division title down to Comstock Resources and Ford, let’s take a quick look at the two companies set to compete in the second half of our Final Four competition.

Ford’s common stock is up more than 42% for 2021 despite a very challenging environment that resulted in manufacturing facilities temporarily closing and prompting the automaker to reduce costs and restructure underperforming businesses. Those shutdowns and other COVID-related pressures resulted in a 9% and 18% drop in revenues for its fourth-quarter and full-year 2020, respectively. On the bright side, Ford rolled out the all-electric Mustang Mach-E, a potential competitor to Tesla, and reintroduced its Bronco brand. Ford plans to invest at least $22 billion in electrification through 2025, nearly twice what the company had previously committed to electric vehicles.

For the fourth quarter of 2020, Comstock reported net income available to common stockholders of $77.5 million or $0.30 per diluted share, compared with 40,829 million or 0.19 per diluted share for the same period in 2019. The company raised $1 billion of equity and debt to redeem its Series A preferred shares and strengthen its balance sheet, eliminating $21 million of annual distributions. Comstock also completed two successful senior notes offerings, lowered well costs by 16%, and ended 2020 with $930 million in liquidity. The company’s shares are up some 24% for the year.

So, will it be the automaker or natural gas producer? Check back to see who moves on and who goes home in these Western matchups. The best part is you can get in on the action too! In the spirit of March Madness, let us know which team you are cheering for and why you are rooting for them to be entered for a chance to win one of four Benzinga.com Essential memberships for 12 months. That’s a $1400 value EACH. Click here to participate. See official terms.